A Special Tribute Issue of Green Egg is now available 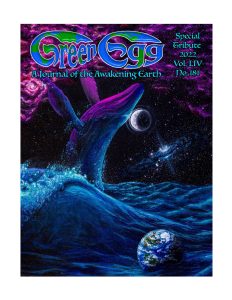 With each purchase of Green Egg you get the entire issue

with all content in a downloadable PDF for only 3.50!

Green Egg, the legendary journal of the Church of All Worlds, reappeared Ostara 2020 for its Spring issue, #171. With roots in the 1960s, a history of unifying the global Pagan community, and legions of fans everywhere, GE enters the new decade with renewed optimism, devotion, and determination to change the world. Be a part of a visionary movement for the 21 st century and beyond.

Green Egg was first published by Tim (now Oberon) Zell on March 21, 1968. From then through 1979, Tim, Julie, Morning Glory, Don Wildgrube and Tom Williams produced 79 issues in St. Louis. Then followed a 9-year hiatus, as Tim, MG and Tom all moved to new lives in NorCalifia.

Nine years later, after many amazing adventures (including eight years of rural homesteading, raising Unicorns, overseas travels, and diving for Mermaids in New Guinea), Oberon and Morning Glory decided to resurrect their beloved magazine. Under the editorship of Diane Darling, Green Egg once again arose like a Phoenix. The first new issue, #80, appeared at Beltane of 1988, featuring OZ’s spectacular color image of a rising Phoenix on the cover.

In honor of the new Star Trek series that premiered at the same time, it was subtitled: “The Next Generation.” Within a few years, GE had again risen to prominence as the foremost “Journal of the New Pagan Renaissance.” With articles by such luminaries as Jacques Vallee, Robert Anton Wilson, Starhawk, and Joanna Macy, it won many awards, including three times the Wiccan- Pagan Press Alliance Gold Award for “Readers’ Choice.”

The last print issue of Green Egg was in 2000, shut down by a hostile CAW BoD based in Ohio. It was revived as an e-zine in 2007 and produced for another 26 issues.

And now, at the dawn of a new Renaissance decade, we present to you the newly-resurrected Green Egg! Produced by Brahn th’ Blessed (editor),  Rev. Judith Barnett (publisher), and Oberon Zell (publisher emeritus) this fourth incarnation will continue to “boldly go where no Pagan publication hasgone before!”

Green Egg Magazine is seeking works of original Pagan fiction, nonfiction, poetry, politics, art, photography, and music, or authors who wish to have a review written and featured in GE should send their work and requests (plus a short bio if desired) to

There are no limits on the style or content, and we loosely suggest word limits depending on the type of work being submitted. We’re looking for work that is bold, enlightening, and emotionally charged. We produce a digital version and publish four times a year.

We’re looking for writers with knowledge and experience in any issue that is of interest to Pagans, Wiccans, Witches, etc … We are also looking for columnists to join our regulars who wish to submit content on various subjects. Send ideas to the address above. If you would like to become a resident columnist, we’d love to have you.

Spring time, new life, birth, and all things related is always the theme in the Spring of the year, but we do not always adhere to the obvious theme. If it’s weighing on your heart, then there are others who will be interested in the subject matter. Please follow your heart!

We publish four times a year and the deadlines for the issues are the 10th of March, June, September and December.